My father was hired at age 16 to help his uncle, Henery Kowalewski with a business adventure. We live on the Mississippi River in a small town in Southeastern Minnesota, which was the home of The Fish Shop. My father’s uncle was a commercial fisherman. His dream was to have my father, who loved to cook, make the fish that he was catching in our river, palatable to the people of Winona. Together, they managed to accomplish their goal. The Fish Shop has a national reputation for excellent seafood. My father developed the batter that the seafood was deep fat fried in, and the tartar sauce that the seafood was dipped in. He would hand can the pickled beets that were served on every table. My father’s recipe library includes salad dressings, cocktail sauce, coleslaw and all of the other delicacies that were served, to include his homemade lemon pie that was available on Sundays. We will be exploring the possibilities of marketing these in the near future.

During WWII, my uncle had to close the restaurant because my father was drafted into the navy, where he gained more experience as a chef. Since my great-uncle’s head chef was off to war, there was no one left to cook the fish that he caught. After the war ended and my father returned to his job and The Fish Shop again opened for business serving 2400 people a week.

The Fish Shop continued to flourish through three generations of ownership and with my father at the helm of head chef. In the fall of 1991, my father, Mose Bambenek, was forced to take a medical retirement from the job that he loved. He was diagnosed with a lung condition known as bronchiolitis obliterans which is a terminal illness resulting in an inflammation of the air sacs within the lungs. He passed away in May of 1995. The Fish Shop closed in 1999. The building was then torn down. Our city lost a historic restaurant. It will forever be missed.

When asked what makes a restaurant a success, my father answered, “Give ’em a nice neat place and a price they can grab, and you’ll make a dollar. But then don’t cheapen it. Once you cheapen it, you’re through.” In our business, we will continue to follow in my father’s tradition by producing Mose’s Fish Shop Tartar Sauce with only the finest ingredients available. 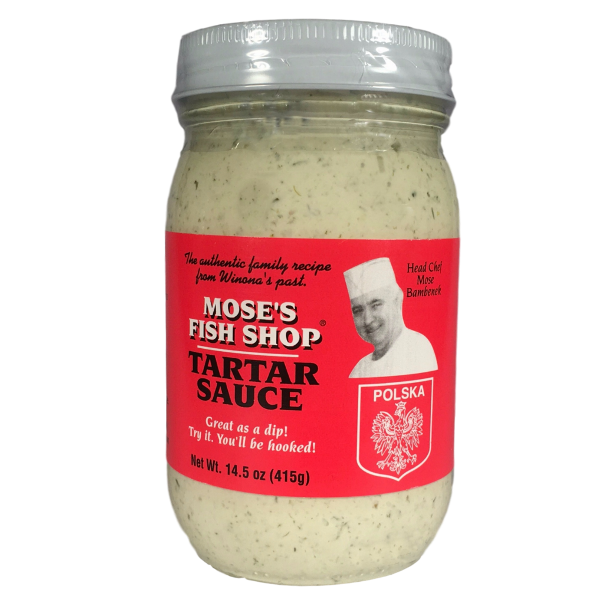 Please Note:
There will be no shipping from May through August (during the hotter summer months).

Thank you for visiting our website. We are a small family-run company and we really appreciate your business! Dismiss